Munich is a large Bavarian city in southeast Germany. It is known as an international centre of business, research, finance, technology, science and of course football! The city is home to two major football clubs: FC Bayern Munich and TSV 1860 Munich, both based at the Allianz Arena. The stadium was totally rebuilt in 2005 and used as a venue in the 2006 World Cup. It is said to be one of the finest football stadiums in the world!
Located on the River Isar, Munich attracts many visitors to its museums, architecture, shopping, parks and world-famous Oktoberfest beer festival. It is a sprawling city and the best way to get around is by tram (streetcar), bus, S-bahn or U-bahn (underground) trains. The city has a thriving cultural scene and a vibrant nightlife making it a great destination to visit for a football break at any time of year. 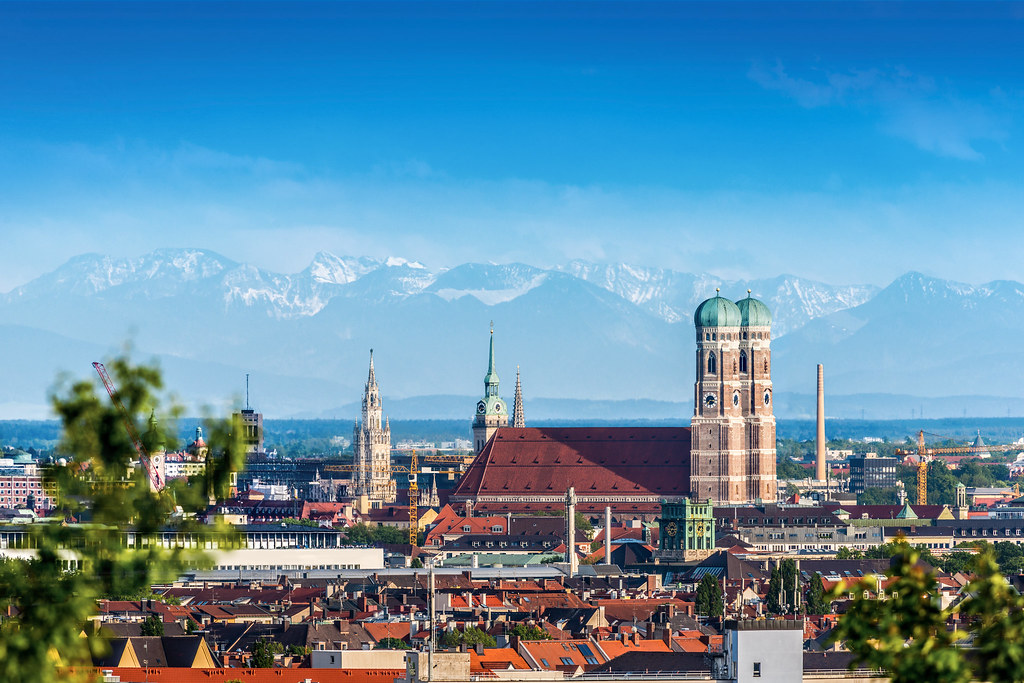 Here is an overview of the highlights of Munich:

A visit to the world famous Hofbrauhaus beer hall is a must while visiting Munich. It was established in 1589 as a royal brewery for the workers of Duke Wilhelm V. Today it comes more under the heading of “cultural experience” than “restaurant” or “bar”, although it combines all three. Located on one side of the Marienplatz near the Old and New Rathauses (Town Halls) there are several different halls to visit within the Hofbrauhaus. The Schwemme on the ground floor holds about 1000 guests, all seated at long trestle tables. Forget popular music, the entertainment is a loud oom-pah band. Upstairs the Braustuberl serves food and beer and the historic Festival Hall (capacity 900) serves food and beer while Bavarian music, dance and entertainment are carried out from the stage with plenty of audience participation. Traditionally dressed women serve plates of wurst and pretzels and carry handfuls of heavy beer steins – an artform in itself.
Location: Marienplatz.
Getting there by S-bahn train: S1-8 to Marienplatz.
Getting there by U-bahn train: U3, U6 to Marienplatz. 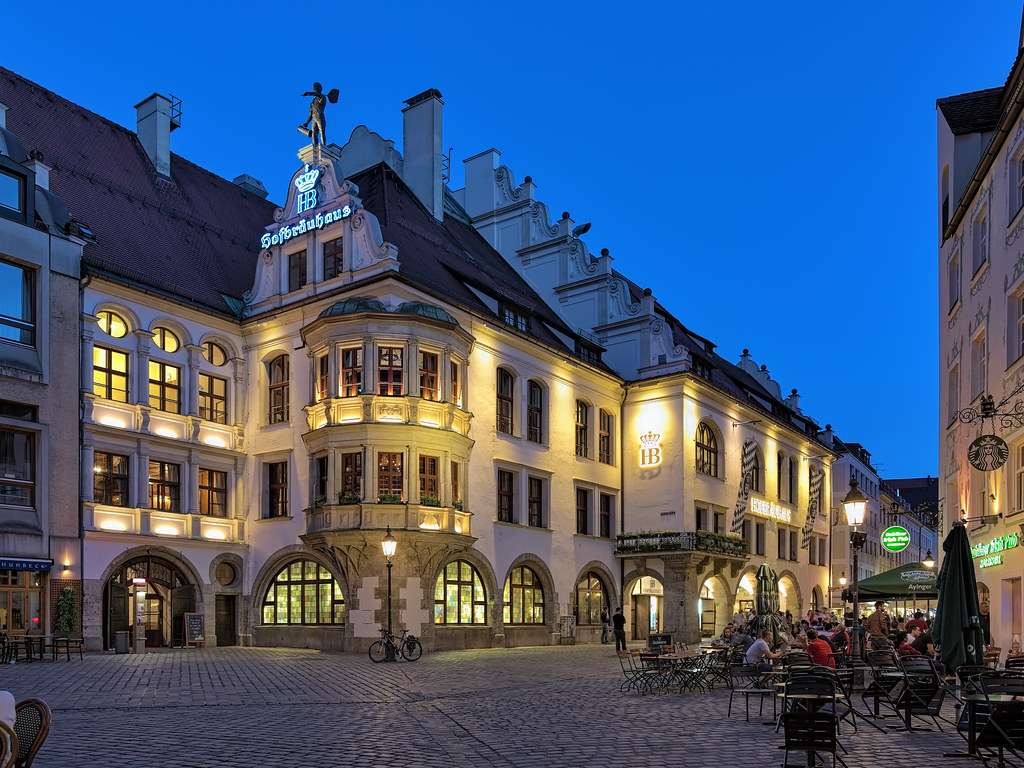 Free to admire, and more a landmark than an attraction, the Neues Rathaus (New Town Hall) takes up most of one side of the Marienplatz with its ornate Flemish Gothic architecture, tower, spires and colonnade. It was completed in 1874 and the former Old Town Hall still stands nearby. The central tower is 79 metres (259 feet) tall and houses the musical glockenspiel (carillon) and clock. Each day at 11am and 5pm crowds gather beneath the column topped by the golden figure of St Mary in anticipation to watch the wooden figures perform. The colourful puppets re-enact the wedding of Duke William V, complete with a jousting match. The second set of figures then take over and perform the Barrelmakers’ Dance which was first performed to commemorate the end of the plague in 1517.
Location: Marienplatz.
Getting there by S-bahn train: S1-8 to Marienplatz.
Getting there by U-bahn train: U3, U6 to Marienplatz. 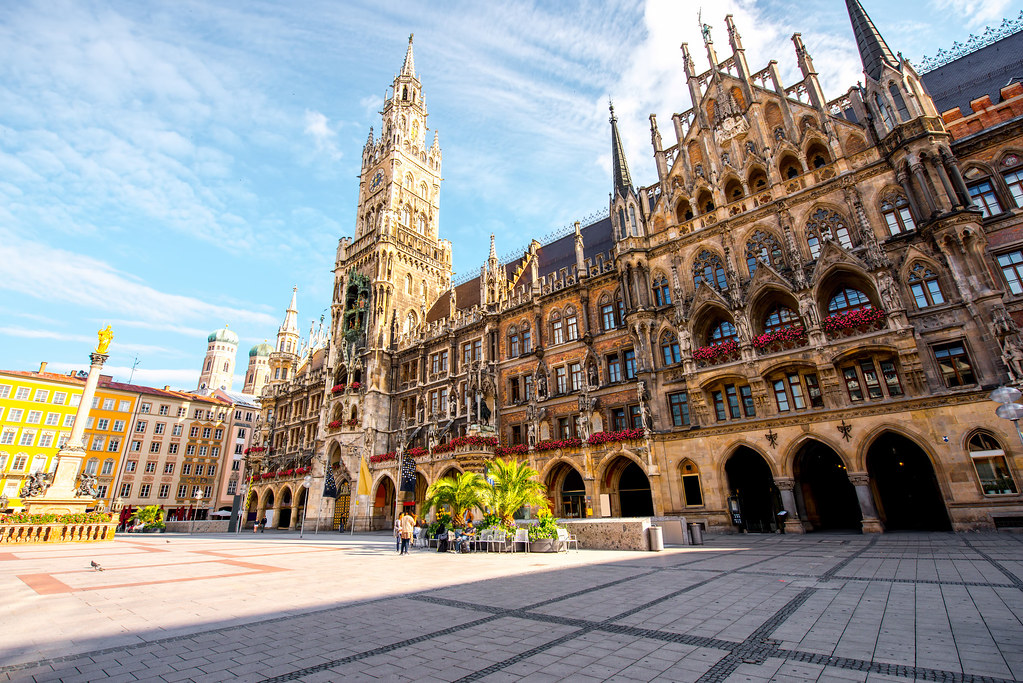 English Gardens/Surfing on the River Isar

The River Isar runs through the city and provides many opportunities for sports and cooling off during the hot summer months. The Flaucher Beach area is popular for sunbathing and swimming. Locals gather to socialize, picnic, paddle and swim near the Thalkirchner Bridge and enjoy the huge beer gardens near the Chinese Tower which seat 7000 people. Admission to the gardens is free. In spring, locals can be seen river surfing on the backwash created by the bridge near the Prinzregenten Street beside the English Gardens. Spectators hang over the parapet of the bridge to watch the daring youngsters jump into the surf on their surfboards and maintain their balance, surfing to and fro on the crest of the wave.
Location: Thalkirchen, next to the English Gardens.
Getting there by U-Bahn train: U3-6 to Marienplatz and then make the short walk to the English Gardens.
Getting there by S-Bahn train: S 1, 2, 4, 5, 6, 7, 8 to Marienplatz.
Getting there by bus: Bus 54 and 154 to Chinese Tower.
Getting there by tram: Tram 17 to Tivolistrasse. 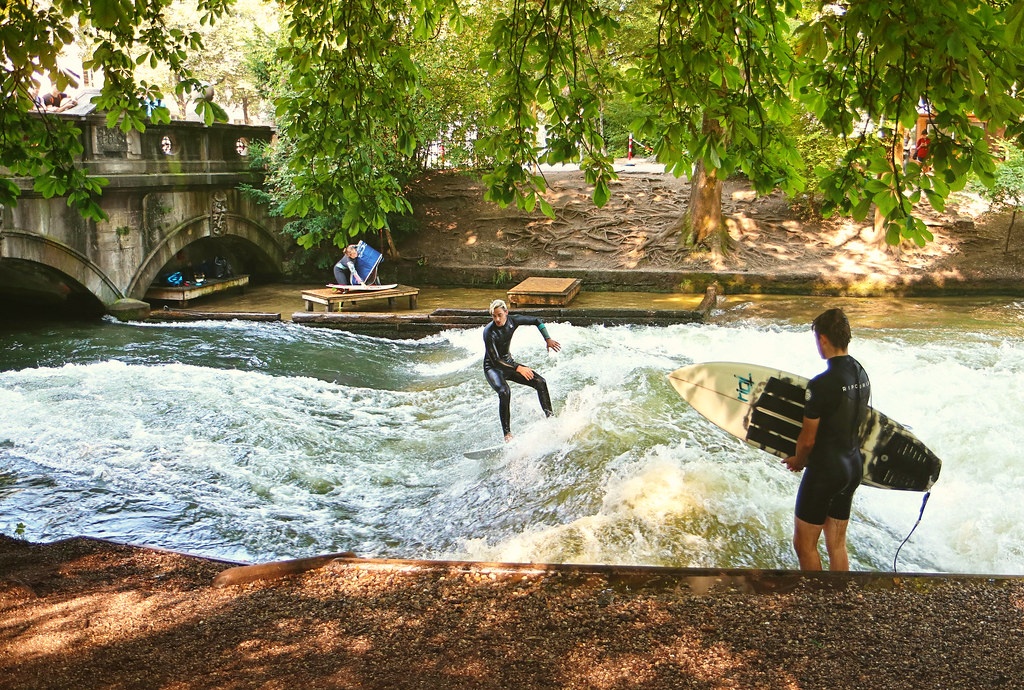 The town of Dachau is a major attraction in its own right and is about 35 minutes from the centre of Munich. On a more sombre note, the memorial site to the former Nazi concentration camp is, for many, a very moving experience. Entrance to the Dachau Memorial is free and includes the grounds, buildings and exhibition. Guided tours are available for €3 and last for 2 ½ hours. English speaking tours are available at 11:00 and 13:00. Alternatively you can take an audio tour which is provided in 8 different languages and comes with a site map. The Archive collection is particularly interesting with written documents, photographs, camp management records, eye witness reports and post-war trial records.
Location: Alte Romerstrasse 75, Dachau.
Getting there by S-bahn train: Take the S2 train from Munich to Dachau station which takes about 25 minutes. The Bus 726 transports visitors from the station to the entrance of the memorial site. A day ticket (Munich XXL) covers both the train and bus fare and can be purchased from an automated machine. 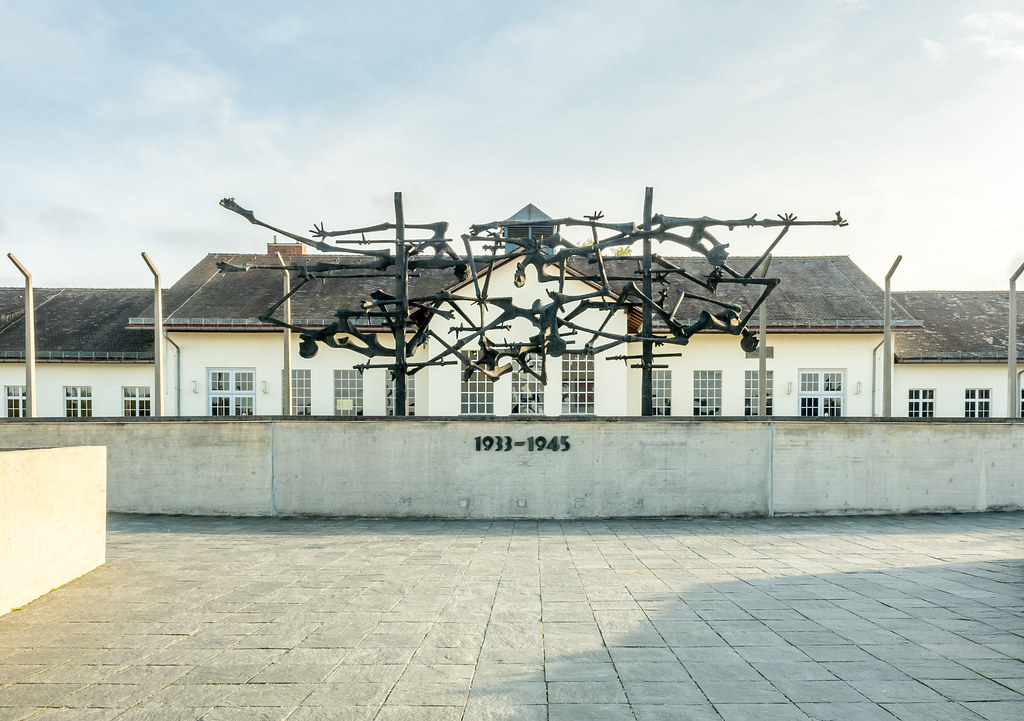 The Hellabrun Wildlife Park and Zoo is a popular family attraction and is known as a geo-zoo as the animals are grouped by continent. There are over 5,000 animals covering 500 different species including elephants, giraffes, rhinos, deer and a petting zoo. The zoo promotes natural landscaping without the need for bars or cages.
Location: Tierparkstrasse 30, Thalkirchen.
Getting there by U-bahn train: U3 to metro station Thalkirchen. It is a 3-minute walk from the station to the Isar entrance to the park.
Getting there by bus: Bus 52 from Marienplatz to Alamanni Street. It is a one-minute walk to the Flamingo entrance to the park. 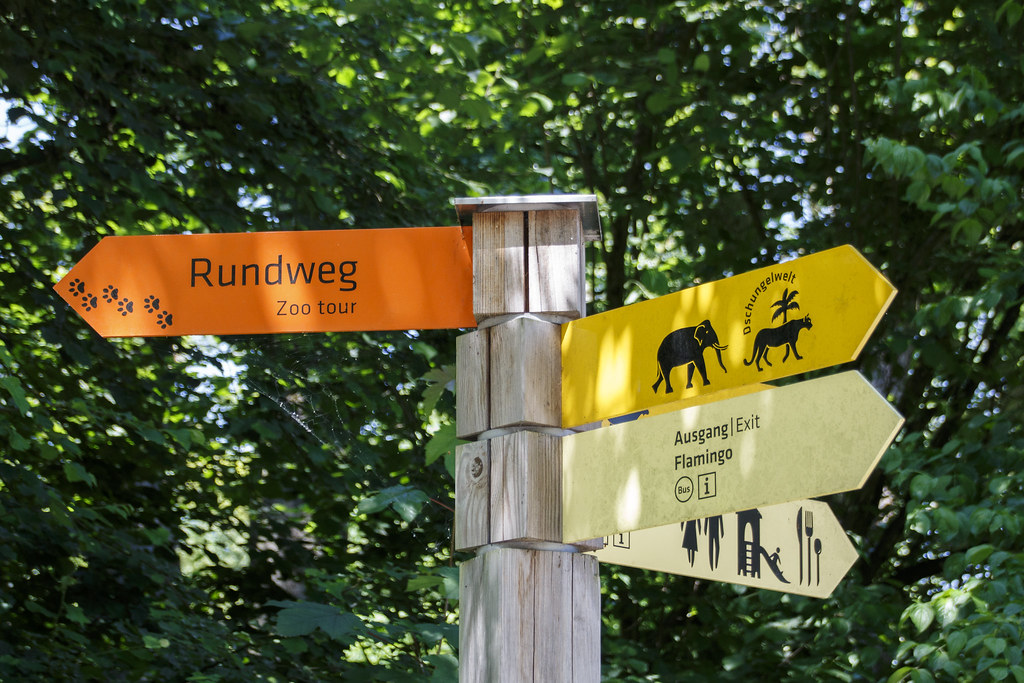 Built as castle in 1385, the Munich Residenz was gradually transformed into a magnificent palace. It was used as the seat of government and the residence of the Bavarian dukes and kings from 1508 to 1918. The Residenz Museum is filled with art, antiques, treasures, sculptures, lavish furnishings and special collections spread throughout the various apartments. It is one of the finest palace museums in Europe. The Treasury holds the crown jewels along with other fine tiaras, jewels, crystal and goldwork on display. The beautifully restored court gardens have water features, grottoes and a pavilion.
Location: Residenzstrasse.
Getting there by S-bahn train: S1, S2, S4-8 to Marienplatz.
Getting there by U-bahn train: U3, U6 to Marienplatz and U3-U6 to Odeonsplatz.
Getting there by bus: Bus 100 Odeonsplatz.
Getting there by tram: Tram 19 Nationaltheater.

The Bavaria Film Studios have been a fun family attraction for many years and are the setting for many popular films and TV shows. Join in the action as you watch stunt shows, see how breathtaking special effects are created and view a diverse collection of German film memorabilia. Open Monday to Friday 10:00 to 15:00 only.
Location: South of Munich at Bavariafilmplatz 7, Geiselgasteig, Grunwald.
Getting there by U-bahn subway train: Line 1 to Weather Stone Square Station then tram #25, or Line 2 to Silver Horn Road Station then Tram #25. Alternatively, all lines to Rosenheimer Platz Station then Tram #25. 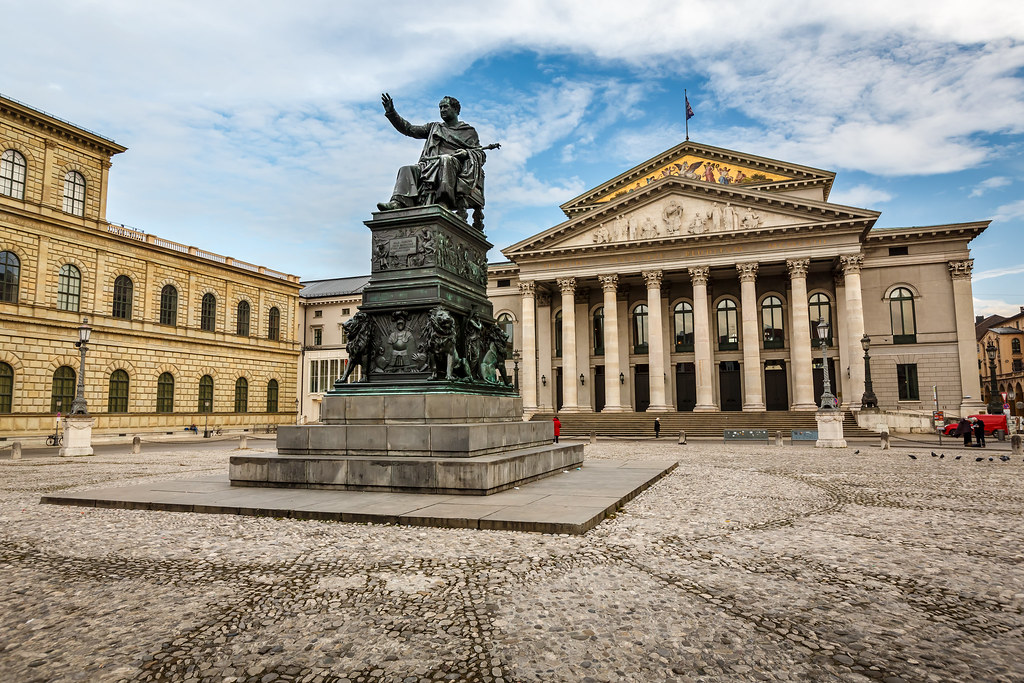